15 Questions to Answer before the next Flood and/or Wildfire

Every emergency responder has heard the stories about the “Big One”, that event that challenged and taxed their agency to the maximum. It could have been a bank robbery, warehouse fire or a 15-car pileup on the highway and each of these events have a common thread; they must have had a lot of radio communications during these events. I can think of a number of large-scale events that can easily challenge any department’s radio communications. I am going to take a look at a number of these events and talk about some ways in which you should be plan for similar events with training and equipment.

In the recent months, we have seen on the news a number of weather related events that involve heavy rains and flooding. These events can result in the public finding themselves trapped in their homes due to rapidly rising waters and calling 911 for help.  There may not be time for us to call in the large National Guard troop transports that can easily travel through the water, so we will have to make plans to move people with small boats. This might involve our first responders walk along side of the boats to move people to safety; where are their radios during this time? Sometimes, the flood can cover extremely large areas and will require multiple outside agencies to assist. If you are in a flood-prone area, what is your communications plans for this type of event? Will you have one radio channel assigned for flood rescue teams? What resources do you have available to assist: large trucks, boats, helicopters and other specialized equipment?  Does your ECC and EOC have up-to-date contact numbers for all of these resources? Will the police officers have the ability to talk with the state and county level officers that will be responding to close off road access to the affected area? How are you going to handle relief assistance to these officers so they can go eat and rest? Do you know if your radio system can reach the furthest most regions of your city or town or will you have to supplement your radio system with telephone communications?  Do you have any radio communication equipment that may be in an area that has a history of flooding or effect by power outages from a flood? 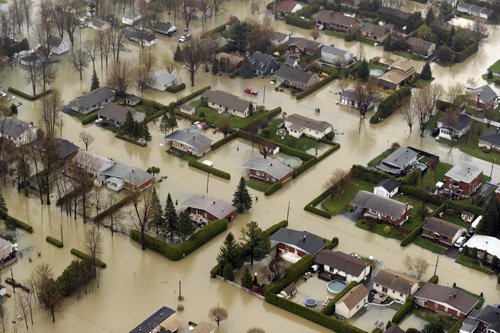 Let’s change the conversation from wet weather to hot weather and talk about wildfires. I have seen, here in Tennessee, a wildfire that moved through a section of East Tennessee in the Gatlinburg and Pigeon forge areas that killed 14 people and burned or destroyed 2000 buildings.

In the first couple of days of the fire, the mutual aid was only from within the one county but after a severe thunder rolled through the area with 40 mph winds, the fire really started to spread to about 10,000 acres. Many parts of this area are mountains and this make communications difficult. The fire was causing power outages and even destroyed the pumping station that put the fire hydrants out of service. After the storm, a call was placed to the State Emergency Management Agency requesting fire mutual companies from the entire state. Companies were sent to a staging area where they were given instructions of what area of the fire they were going to be dispatched to. A large majority of the communications was handled via cellphones. The wildfire teams have to coordinate their attacks on fires based on weather conditions that are present and what is predicted to happen in the next few hours. Teams need to be in close communications with the command and control teams and have to exercise due diligent when looking out for their own safety. They also need to stay where they are assigned and only move with orders from command because the people in the command post can see the overall picture and may not want crews to move into a certain area that may be unsafe. The EOC will also have an air boss assigned to the team that will handle all the aircraft assigned to the event and has to be able to them from a safe location where they are getting reloaded with fuel, water and/or fire retardant to the area of the fire they are needed most and then back to the reloading base; and in some case having 5 – 10 aircrafts in the air at any one time. The airspace about the fire may also have helicopters from other state and local agency’s as well as the media.

Speaking of airspace and aircraft, I should also mention the challenges of communication when dealing with aircraft incidents. For years, the pilots and the Aircraft Rescue and Fire Fighting (ARFF) crews were not able to communicate; all information had to go through the tower. Some crashes are located in remote areas not easily reached by vehicles like the Value Jet crash into the Everglades. May 14, 2017 there was a Lear Jet crash just off the airport at Teterboro Airport in New Jersey.

The first report of a crash was from a pilot in another plane landing that watched the plane crash into a neighborhood. The 911 center phone bank lit up with numerous calls and multiple departments responded. The first companies on scene encountered heavy smoke and zero visibility. They were unable to access the scene right away and had to have companies respond into the area from the downwind side.  If you had a plane come down in your community who would you call for assistance?  Where is the closest airport, would you have your ECC call them to request assistance from their command staff that has expertise in handling these incidents?  Are you able to make out the airlines involved and would you call them directly or would you ask the ARFF department at the airport to make the call?  If it is a large frame aircraft and you need the ARFF crew large crash trucks, can you get them to your scene safely? By safely, I mean to know a route that these large and heavy trucks can travel with not having to travel over weight restricted bridges or go under overpasses with less than 13” clearance?  Once on-scene, can you talk to them via the radio, are they able to come up on your frequency?