Earthquake Disaster: Preparing for the Really Big One 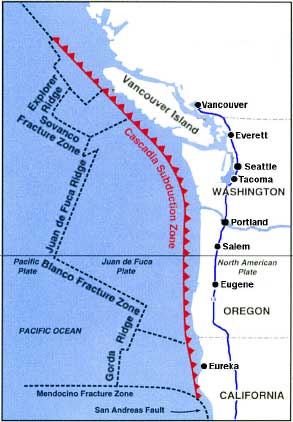 The risks of “the Big One,” (a catastrophic major earthquake disaster in the southern California area), as
well as newly recognized increased earthquake risks in other regions of North America have been considered by many. However, there is yet another potentially catastrophic earthquake zone that is less well known and deserves serious consideration as well, namely the Cascadia Fault earthquake threat in the U.S. northwest region. It is what Vicky Gan, writing in City Lab, noted that the New Yorker feature
article on the risk called “the Really Big One.” The U.S. pacific northwest region is in the threat zone for a major earthquake disaster from the Cascadia Fault. A report titled “Oregon Resilience Plan: Reducing Risk and Improving Recovery for the Next Cascadia Earthquake and Tsunami” describes the dangers from both ground shaking, tsunami and chain reaction failures from such a major shake. The report notes that a major Cascade Faulty quake “would cripple the entire Pacific Northwest, from Northern California to British Columbia.” It projects that tens of thousands would lose their lives with many more injured. The major cities in the region could be devastated. The report says that across the pacific northwest “bridges, dams, roadways and buildings [would be] in a state of utter collapse. No water, electricity, natural gas, heat, telephone service or gasoline — in some cases, for months. Economic losses in excess of $30 billion.”
According to a summary of the recent scientific research in Communities Digital News:
“The Pacific Northwest is 71 years overdue for an immense 8.4 or larger earthquake, and tens of thousands of lives are at risk…. There have been only two comparable earthquakes in recent history. One was the 2011 Tohoku earthquake that damaged most of Japan’s east coast, killed 19,000 and destroyed the Fukushima Daiichi Nuclear Power Plant. The other was the 2004 Sumatra–Andaman earthquake that killed an estimated 230,000 in the Indian Ocean basin.” Credit: Reuteurs Tohoku Earthquake
The Cascadia Region Earthquake Workgroup calculated and summarized the risks of a major quake in their report “Cascadia Subduction Zone Earthquakes: A magnitude 9.0 earthquake scenario.” This report characterizes the effects of a major subduction earthquake on communities along the entire Cascadia Fault Subduction Zone. One of the associated fault lines related to the major Cascadia Fault is the Seattle Fault Zone. An earthquake on the Seattle Fault poses the greatest direct risk to the city of Seattle. The Seattle Fault Zone extends east-west through the very middle of the city. Quakes along this zone could be as large as magnitude 7.5.
Seattle Office of Emergency Management warns that:
“An earthquake on the Seattle Fault poses the greatest risk to Seattle. Deep quakes are the most common large earthquakes that occur in the Puget Sound region. Quakes larger than 6.0Mm occurred in 1909, 1939, 1946, 1949, 1965 and 2001.
Megathrust earthquakes are the greatest risk to the region as a whole. A megathrust earthquake could reach M 9.0+ and affect an area from Canada to northern California. Shaking in Seattle would be violent and prolonged, but not as intense as a Seattle Fault quake. This area has a megathrust earthquake about every 500 years. About 15% of Seattle’s total area is soil that is prone to ground failure in earthquakes. The Duwamish Valley, Interbay and Rainier Valley are vulnerable to ground failure and shaking because of the liquefiable soils in these areas. Seattle has an estimated 819 unreinforced masonry buildings that perform poorly in earthquakes. These older brick buildings tend to be concentrated in areas expected to experience the strongest ground motion during earthquakes. Other vulnerable building types exist, too. Seattle is heavily dependent on its bridges. Damage to them would impair emergency services and the economy. The city has launched a multi-year effort to retrofit them to a life-safety standard so they won’t collapse. Despite the retrofits, many will not be usable after a strong earthquake. Most of the critical bridges were retrofitted by 2009.
Combined property damage for quakes in 1949 and 1965 in the region amounted to roughly $400 million (2010 dollars). The 2001 Nisqually Earthquake resulted in damage to City of Seattle buildings, infrastructure and response costs that exceeded $20 million. Adding in the costs of repairing arterial road structures, the figure topped $36 million. Secondary impacts such as landslides, tsunami, fires, and hazardous materials releases could become disasters themselves. In many earthquakes more people die from fire than building collapse. 2013 research finds that Seattle is at risk of thousands of landslides following a strong (magnitude 7) Seattle Fault earthquake.  Estimates range from 5,000 if soils are dry to 30,000 if soils at saturated. Credit: The Columbian 2001 Nisqually eartquake
A large Seattle Fault earthquake could trigger a 16-foot tsunami that would strike the Seattle shoreline within seconds of the earthquake and flood it within 5 minutes. Although megathrust and deep earthquakes will not directly cause tsunamis in Seattle these sources could initiate landslides that result in local tsunamis. A magnitude 7 Seattle Fault earthquake could cause dozens of fires. Suppressing the fires would be more difficult because damage to the water system would reduce water pressure in many parts of the city. Structural failure and fires would probably cause multiple hazardous materials releases. They could range from minor spills to major incidents.”
If you are based or work in the pacific northwest region, it is essential to take steps now in order to achieve readiness for the coming “Really Big One.”  Assess the risks to which you and your business are exposed from earthquake consequences. Learn the risks and prepare. One useful tool is the new on-line application the Seattle Natural Hazard Explore. The Seattle Natural Hazard Explorer is available that allows individuals, businesses, schools, not-for- profits and public sector agencies to calculate their idiosyncratic risks (Predict Your Risk in Seattle’s Big Earthquake).