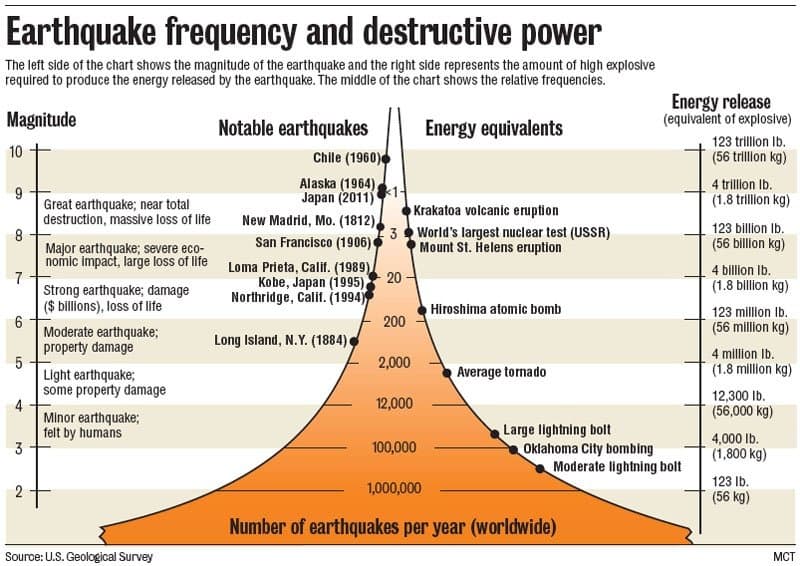 According to the U.S. Geological Survey (USGS) neither the USGS nor any other scientists have ever successfully predicted a major earthquake. Given the lack of a demonstrably reliable prediction capability, the USGS therefore focuses their efforts on the long-term mitigation of earthquake hazards (i.e. by helping to improve the safety of structures or promoting preparedness), rather than by trying to accomplish short-term predictive warnings. However, based on scientific data, probabilities can be calculated for potential future earthquakes. For example, scientists estimate that over the next 30 years the probability of a magnitude 7 earthquake occurring in Northern California is 76% and 75% in Southern California.

In an article published in the Wall Street Journal (“Earthquake ‘Magnitude’ Misses the Mark,” 17 September 2016, A2) Jo Craven McGinty calls attention to the widespread ambiguity and potential confusion that results due to the public’s lack of understanding of the measurement of earthquake effects on people and property. She rightly identifies one source of misunderstanding as the ubiquitous descriptions of earthquakes in terms of “magnitude” rather the more practical quantifications of “intensity.” This focus on magnitude and a corresponding lack of focus on the risks from differing levels earthquake intensity may result in incorrect or ineffective mitigation and preparedness.

There are many different ways to measure different aspects of an earthquake. Magnitude is the most common measure of an earthquake’s size but it may not be the most useful or practical. Magnitude is a measure of the size of the earthquake source and is the same number no matter where you are or what the shaking feels like. The Richter scale is a simple and primitive method that measured the largest wiggle on an earth movement recording, but other magnitude scales can measure different parts of the earthquake.

According to the USGS, earthquake size, as measured by the Richter Scale is a very well-known, but not very well understood, measurement guide. The idea of a logarithmic earthquake magnitude scale was first developed by Charles Richter in the 1930’s for measuring the size of earthquakes occurring in southern California using relatively high-frequency data from nearby seismograph stations. As more seismograph stations were installed around the world, it became apparent that the method developed by Richter was strictly valid only for certain frequency and distance ranges. In order to take advantage of the growing number of globally distributed seismograph stations, new magnitude scales that are an extension of Richter’s original idea were eventually developed.  All of these magnitude scales, while suitable to specific geographic locations, were limited in generalized use for large or widespread regions. One, more uniformly applicable extension of the magnitude scale, (known as moment magnitude) was subsequently developed which, for very large earthquakes, provides a reliable estimate of earthquake size. 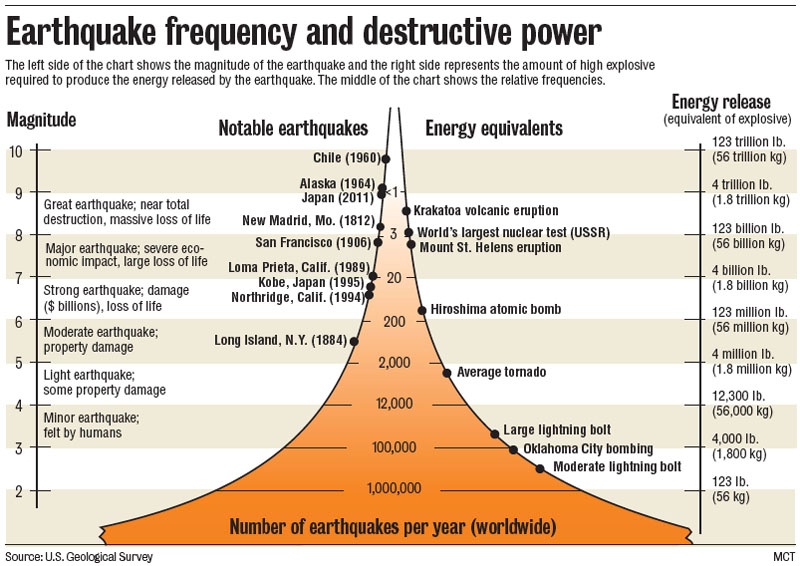 Another measurement of earthquake size is intensity. Intensity is a measure of the shaking and damage caused by the earthquake, and this value changes from location to location based on multiple factors. Thus magnitude and intensity measure different characteristics of earthquakes. Magnitude measures the energy released at the source of the earthquake. Magnitude is determined from measurements on seismographs. Intensity measures the strength of shaking produced by the earthquake at a certain location. Intensity is determined from earthquake effects on people, structures, infrastructure and the natural environment. While intensity scales are less well known, they may in fact be far more important for understanding the impacts of earthquakes and therefore affect decisions regarding preparedness, mitigation and response planning.

One intensity scale is the Mercalli Intensity Scale was developed by Italian volcanologist Giuseppe Mercalli in 1884. It is known today as the Modified Mercalli Intensity Scale (MMIS). The Mercalli scale describes the intensity of an earthquake based on its observed effects, while the Richter scale describes the earthquake’s magnitude by measuring the seismic waves that cause the earthquake. The two scales have different applications and measurement techniques. Intensity scales measure the amount of shaking at a particular location. So the intensity of an earthquake will vary depending on where you are. Sometimes earthquakes can be classified by the maximum intensity they produce. Magnitude scales measure the size of the earthquake at its source. So they do not depend on where the measurement is made. 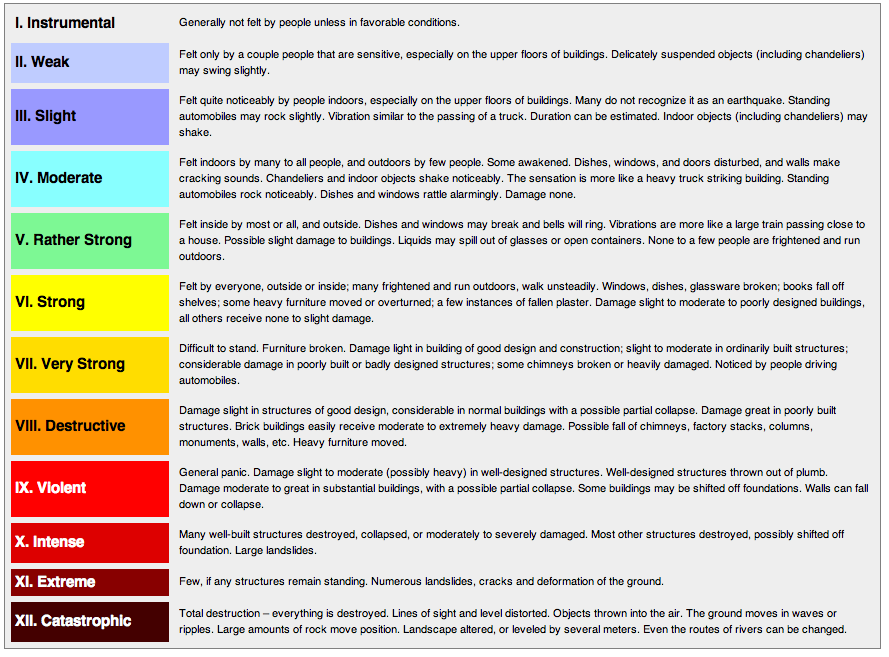 No single measurement scale provides sufficient information to judge the overall comprehensive impact of an earthquake. According to the USGS  higher magnitude earthquakes do have greater energy release and can potentially affect a much larger area. However, personal and property losses experienced depend directly on the exposure and vulnerability of a population and property to specific levels of shaking and how intense the shaking is at a given particular location. Further, earthquakes of various sizes and magnitude have highly variable effects on people, structures and infrastructure; the complex and variable nature of the effects for differing events can be attributed to a number of variables, primarily the variance of the hazard distribution (predominantly, shaking intensity), the different population exposures, the vulnerability of the built environment, mitigation steps taken and the overall resilience of the communities affected.

Potential earthquake risks, especially those expressed as anticipate magnitudes, are not well understand by at risk populations. It may be that we need to more effectively communicate earthquake intensities in probably forecasts and what such intensity levels would mean for a specific location, structure or infrastructure. At the very least, we need to remind those vulnerable that there is not one threshold magnitude above which damage will occur or levels of damage will occur. In fact, it is important to educate those in risk zones that damage from an earthquake depends on many other variables, such as the distance from the earthquake epicenter, the type of soil you are on, etc. In addition, we should expand their focus to how the anticipated intensity of an earthquake (not just the magnitude) should affect their preparedness, readiness and recover planning. This could result in more effectively communicating risks and consequences which in turn can lead to better preparedness. 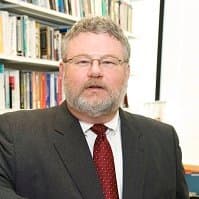