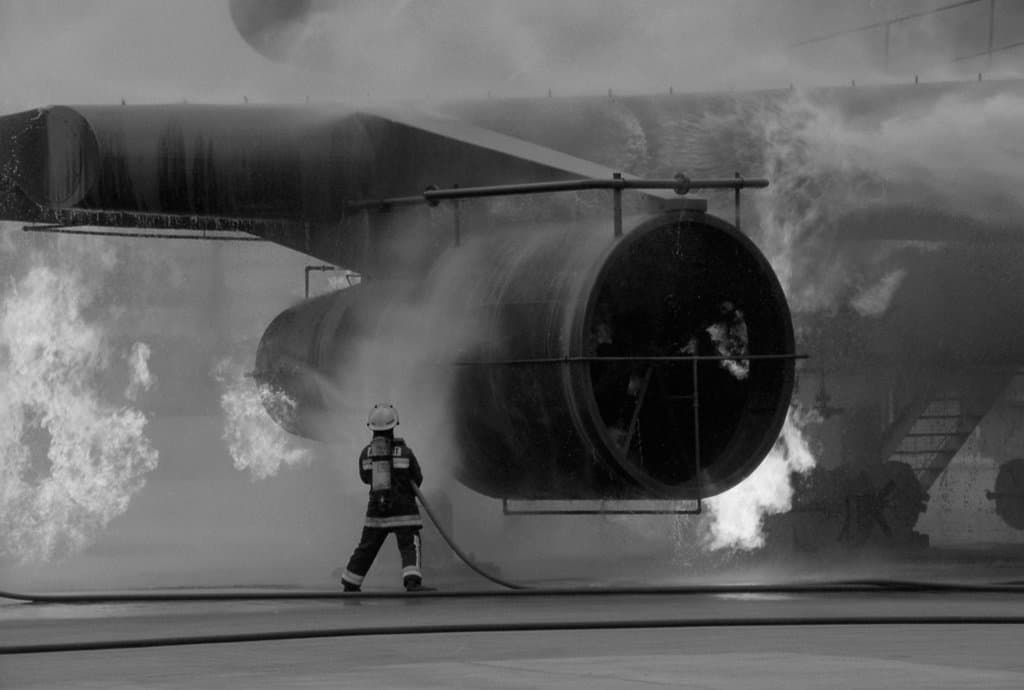 Too often, proponents of individual concepts or pillars believe that theirs is more important. I will admit, to a degree, of having fallen into that chasm in my initial understanding of Emergency Management. My professional expertise lies firmly rooted in anything response oriented.

I spent the majority of my career as an operational police officer, but became interested in a more rounded “response” to emergencies as a result of an assignment to Ottawa’s Macdonald-Cartier International Airport, upon the download of administrative responsibilities for airports to private administrations from the federal government.  While the feds still owned the land that airports occupied, the Royal Canadian Mounted Police (RCMP), no longer working directly for the federal government, pulled back in favour of municipal police agencies at certain classes of airports.

It was there that I was introduced to the concepts of both security and emergency operations centres and, quite frankly, I have never looked back. In the diversity that would be a disaster scenario at an international airport, I suddenly understood, not only the enormity of any potential situation, but the variety of expertise that would be required in order to reach an acceptable conclusion. I realized that I possessed only a specific type of that expertise.

Thus, upon my retirement from active policing, the segue into Emergency Management and the understanding of all its requirements, was a natural one for me.  While I still was far more cognizant of the response side of things, I fully endorsed the need for all other pillars:  preparation, mitigation and recovery. 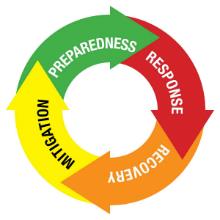 I would argue that the pillars are divided into two distinct camps.  Preparation and mitigation can be considered more theoretical in nature, while response and recovery are operational.  In a lot of ways, I would contend that proponents of the theoretical considered the operational poorer cousins.  As the overall discipline of emergency management has its roots firmly planted in theory, this is not surprising and really is more of a simple observation than a criticism.  I will, however, concede that it can be considered a “critical observation”.

The overall goal of emergency management is the resilience of communities, wherever and whatever those communities may be.  In order to achieve such resilience,  all aspects and concepts must work in conjunction with one another.  There is no room for siloism.

Thus is born the notion of interoperability, especially with respect to the operational applications of response and recovery.  Nominally affiliated with those operational applications, interoperability can also be applied to the theoretical as well, when overall emergency management is achieved.  Nowhere is this more critical than in communications.

Communications, by their very definition, are the foundation of virtually everything that is critical across society, let alone emergency management.  However, as I have opined in previous postings, when one looks at the “issues” of interoperability, or even communications specifically, the default is to resolving the technical difficulties of sodoing.  This is a vitally important component that must be overcome and significant in-roads, both technically and societally (read government regulation and oversight), have been made.  However if, as I have previously contended, you have people or systems that do not know how to work with one another or, more importantly, do not want to work with one another, you have wasted untold millions of dollars in both equipment and working hours.

Let us assume that, from the “operational interoperability” perspective, we have decided to work together.  To the best possible degree, we understand and appreciate the need and the raisons d’etre of one another.  In an effort to reach that ultimate goal of resilience, we now must be able to, physically, communicate accordingly and appropriately amongst ourselves.

It can be argued that, whatever befalls any of us; the one piece of critical infrastructure that will likely be affected will be our communications capabilities.  Of what is considered critical infrastructure, perhaps communications is the most critical.   Almost since the days of Marconi and Bell themselves, we have pretty much taken those capabilities for granted.  Yet when affected, we scramble.  Thank goodness for those people whom many of us considered geeks in grade or high school, that maintain the world wide network of ham radio operators.  Without them, in disaster after disaster, we would have been completely lost and cut off from the rest of society.  Unfortunately, the need for mass communications completely overwhelms their numbers, so to future and reliable technologies we must turn.

The key to re-establishing communications capabilities in an emergency or disaster situation is portability and speed.  Certainly, effectiveness and clarity are equally as important, but we must get the technology to where it needs to be in the minimum amount of time.  In addition, such portable capabilities need to be multi-dimensional in what they can achieve or, indeed, re-establish.  In today’s day and age, simple two-way radio communications, while essential, are not enough.  Also required, at a minimum, are telephone and data capabilities, as we have simply, as a connected society and world, come to rely on their being at our fingertips.  This also speaks to the generational differences in, as a baby-boomer, while I might be completely comfortable with two-way radios, those of younger generations may be far more comfortable with newer technology.  Thus, all modern aspects of communications capabilities must be addressed.

Base Camp Connect has developed one of the most interactive systems of portable communications capabilities on the market.  The size of the average military bunker box, it is relatively light-weight and can literally fit in the trunk of a Honda Civic.  It can be transported, carried, set up and operated by one person.  The unique design of, not only the system, but many of the components thereof, allows for the rapid set up of a variety of applications, including telephone, two-way radio, data, internet and satellite phone, to name just some.  The basic system in completely contained within the bunker box and includes sufficient radios and cellular telephones to establish a required communications network in an affected disaster zone.  The system further can include its own IP address, allowing for internet connections and, as a result, vital data communications. 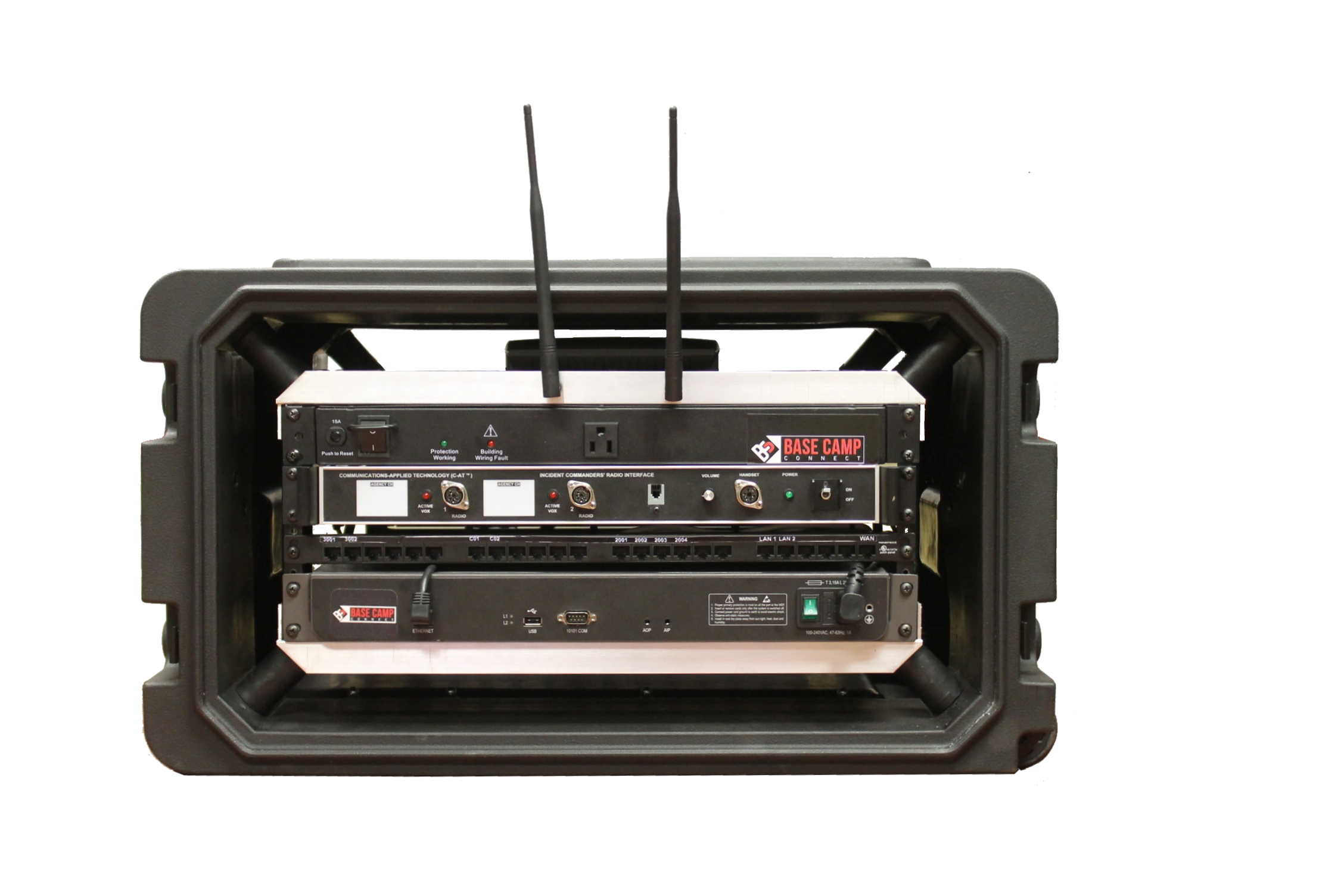 Base Camp Connect allows for the system to be tailor made to the requirements of the client.  All disciplines of communication connected to the system are interoperational and information can be broadcast and received across the spectrum.  From the time that the system arrives at the required location, it can be operational in less than five minutes.  It can also be included as part of a mobile Emergency Command Post, as it has been in at least one Ontario community.  It has the capacity to be both an immediate and long range system, by offering repeater capability through land-line and satellite components.

Like many systems of this kind, there are more or less aspects to it, depending on what the individual client likes or needs.  However, it has the unique ability to provide new capabilities, work with existing ones, or a combination of both.  As a portable system, it can be where it needs to be with a minimum of difficulty and a maximum of efficiency in that it does not require a team to set it up or operate it.  In addition, there is a team of I/T professionals on hand to trouble shoot and make sure that the system is operating as designed.

Finally, its portability allows it to be re-packaged once no longer needed, and stored conveniently and safely.  In addition, its adaptability allows it to be used for lesser applications, such as large events that might otherwise overburden communications capabilities of certain communities.  Essentially, the possibilities are endless.

Emergency Management’s ultimate goal is resiliency.  Through preparation and mitigation, we would hope that is achieved, however in the event of an occurrence, both response and recovery play significant roles in said achievement.  In order to attain it, all pillars must work together and, when required, the ability for us to communicate effectively, both actually and interactively, is essential.  To have a system that allows us to accomplish such feats, within a reasonable amount of time, especially when a significant amount of our thoughts are on other requirements, goes a long way to achieving resilience.

If you’re interested in learning more on Base Camp Connect, schedule your free demo here:

Set Up your free demo