How to Manage Radio Communications during Special Operations ? 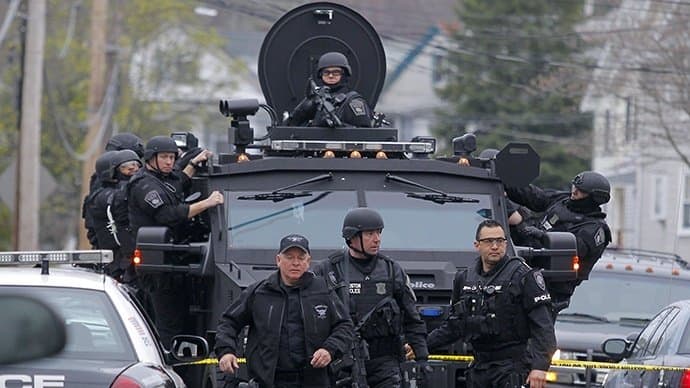 I was reading an email earlier from the Federal Emergency Management Agency about a new program that they have designed and are offering. After reading the description, I started to think about the radio communications involved with these types of events.

The course description of Preparing Communities for a Complex Coordinated Attack is: “This course provides first responders from multiple disciplines with skills to manage the initial response to a large-scale attack in a chaotic environment during a complex coordinated attack (CCA). It aims to train responders in how to use intuitive skills such as observation, analysis, anticipation, and awareness to recognize the possibility of an attack involving multiple incidents of an extreme magnitude that inundate resources, exceed conventional tactics and strategies, and often require a joint response involving members from multiple disciplines and jurisdictions.”

I would like you to take a minute and think about what would this mean in your community. Could this be an active shooter with multiple victims?  How about a 50-vehicle crash on the highway during a snow storm?  Could it be a truck used by a terrorist to crash into a large group of people at a holiday event as happened in Berlin?  How about the two bomb attacks during the Boston Marathon in 2013 or the London bus and train attacks.  So now you have a good mental picture of how big and how bad a situation can be or become. One thing that holds true for all these events is the fact that they all had a massive multi-agency response to the incident. From the news coverage of these events, you can see that the first 15 to 30 minutes result in an overtaxing of all the public safety communications frequencies with information or requests for assistance.  It is only with good training and practice that command officers will be able to calmly control the scene and request the resources to the right locations in a timely manner to get the job(s) done and hopefully save lives. The reason I said 15 – 30 minutes is that in initial response phase of a large-scale incident, it appears that the police are responding and doing their job, controlling traffic, looking for suspects, helping the injured and giving updates to their emergency communication center and same would hold true for the EMS workers and firefighters.  Once the higher-ranking officers will be on-site, they will want to establish a multi-agency command post and start to make sense out of what has happened and try to bring command and control to the scene. Within each of the agencies that respond to a large-scale event will be special operations teams that will want and need to have their own radio communications capabilities.

Take for example the Boston Marathon Bombings, the police department operated on their district radio system for the patrol officers in that area as well as a citywide radio system to bring in additional officers to secure the area and handle crowd control.  There were members of the Bomb and SWAT team that responded and those team members worked on their own tactical frequency; members were also searching the area with K9’s assigned to the bomb squad. The EMS operations involved the dispatching of ambulances to the scene to the designated staging / loading area, the triage and treatment area and then the ambulance to hospital communications with information on the patients being transported and their conditions. The fire service had the lead on the initial incident and luckily there were no structural fires from the explosions so they were mainly working to rescue victims, treat them and transport them to the EMS area for transport. The amount of radio traffic on all these frequencies was overwhelming and it is at times like these that requests for assistance and even a “mayday” could get lost in all the confusion.

Discover how to interconnect up to 10 radio networks with otherwise incompatible radios ! I can see why FEMA has designed and is offering this course and it is a true sign of our times. These events are going to get bigger and more complex and it only takes a few people (terrorist) to inflict a large amount of damage like the two men with suicide vest at the Brussel’s airport in March 2016. The public safety first responders need to be well trained and to practice how to respond to these events.  Command and control officers at these large events also have to realize that they cannot just call every resource available in the city to the event because they still have a responsibility to provide service to the other parts of the city at the same time.  Officers need to understand how to operate under these conditions. Also, they need to try and keep their messages short and to the point while trying to remain calm and in control.  The emergency communication centers also need to have good training and good equipment so that they can separate these incidents to their own operations channels while still being able to keep the rest of the city operational.  Just because there was a bombing on Main street does not mean we can forget about the house fire on Elm street or the man having a heart attack on Broadway; we need to be able to still provide our emergency services to the citizens in the unaffected areas.

Public safety officers need to take the time to get the training either through table top exercise or full-scale drills to practice the skills they need to do their job. You need to practice with your radio equipment to see how you can handle the response to a large-scale event. You also need to have a plan of who is going to work on what channels in advance. If not, the incident commander needs to assign these channels as soon as possible at the beginning of the event. Practice with your mutual-aid agencies and see if you have communication issues before an incident. Keep in mind that some of these fixes may cost money with upgrades or purchases of new radios which will take time so start your planning today!