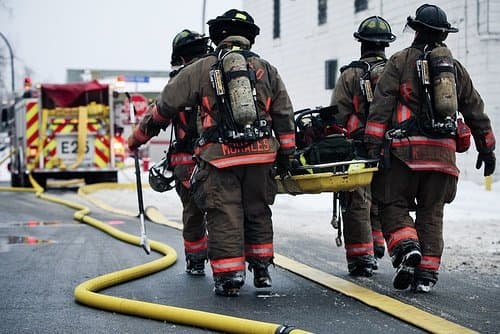 Communications on the fireground are difficult at best when things are going right, now when you add a mayday incident into the mix, things can go terribly wrong in just a few minutes. There are many sides to the mayday communication incident that everyone needs to be aware of and must follow your departments SOP/SOG to ensure the fast response to those firefighters in trouble.

Let’s start with the source of the mayday, the firefighter(s) that are in need of assistance. Firefighters need to know when they are in trouble and not try to man up and say I can handle this and get myself out of this mess. It is not a sign of weakness that you call the mayday, it is a sign of not caring; not caring about your fellow firefighters or not caring about your family and friends who are all depending on you. The firefighters need to understand the complexity of the situation they are in; the incident commander does not have x-ray vision to see exactly where you are in the building. Your responsibility is to alert the incident commander as soon as possible when you are in need of assistance. It should sound something like this: “Mayday, mayday, mayday Engine 1 to command”, “Command to all units operating at 123 main street, Engine 1 has a mayday hold all radio traffic except Engine 1, Engine 1 what is your location and condition.” Engine 1 to command we are on the 3rd floor “C” – Charlie’s side of the building in a rear bedroom and we have had a ceiling collapse with 2 members entrapped under the debris, no serious injuries but need help extricating them”. Command to Engine 1, assistance is on the way, Command to the RIT team did you copy?” “RIT copies in route”. At this point, the entrapped firefighters should sound their pass device to assist the approaching RIT team members finding their location. The command officer is now faced with firefighters trapped, resource being depleted and additional resources needed. The activation of mayday and deployment of a RIT team should also cause other actions to happen, EMS should be deployed to standby in front of the building, an extra alarm may be transmitted for additional manpower and the assignment of a new RIT Team will be needed. To ensure the safety of the entrapped firefighters, all other members that are presently assigned to fire attack need to keep operating in that mode. If everyone drops their hoses and runs to the 3rd floor, the fire will now grow unchecked and endanger everyone. If available, the radio channel that the trapped firefighters are operating on should be designated to the RIT channel and all other radio traffic needs to be moved to another frequency. The incident commander should assign a chief officer to the RIT operation and provide him with updates as to the progress of the operation.

The RIT Team from the beginning of their assignment should have been listening to the radio and being aware of the fire conditions on each floor and the officer should have done a quick 360 of the building while his team was preparing the RIT equipment for standby in the front of the building. Once the mayday was called, the RIT Officer should have started to get his team moving towards the building and confirming the location from the incident commander. Keeping this channel clear of all other traffic at this point forward is now the responsibility of all the other firefighters on the scene.

The remaining companies operating at this incident should switch to the new radio channel that was either assigned by the incident commander or the dispatcher. Each officer at this point should ensure that the entire team heard the message and is now operating on the new channel. The company officers need to ensure that their teams stay intact and no members freelance and go to the scene of the mayday without orders to do so. As much as each member on that fireground will feel the need to respond and assist, there is still a job that they have been assigned to do and the incident commander is expecting them to be doing that job. Once the RIT Team reaches the trapped firefighters they shall notify command that they have been located and what steps are being taken to extricate them and if any special pieces of equipment are needed like lifting bags or chainsaws. A special reminder for all members not to use firefighters names during the rescue operations; family members may be listening to the radio traffic and should not be notified in this manner as to a members injury; use the command designations only at this time. Once the RIT has extricated the members they shall notify command as to the number of members injured and how long it is going to take to transport them out of the building. The EMS crew should be monitoring the situation as to the number of injured and where they are going to be removed from the building so that they can be standing by to have them transferred to their care.

Throughout this entire operation, the fire dispatchers should be paying close attention to the fire channels in use and make sure that no messages will be missed, especially ones from the entrapped firefighters to command. They are also to remind companies as to what channels fire operations are on and to keep the RIT channel clear of non-emergency radio traffic. Keep all messages short, clear and to the point so as not to tie up the radio.

Thank you and stay safe!!